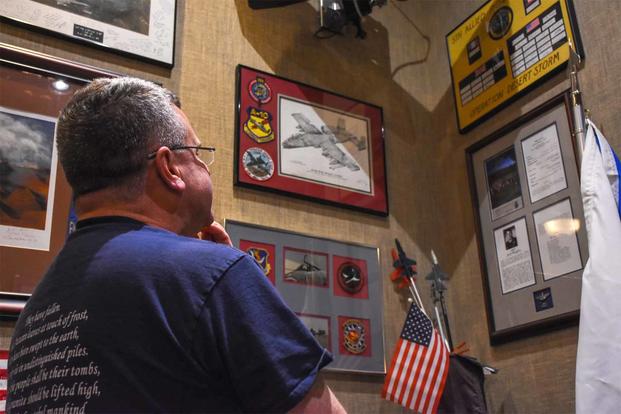 Lt. Col. Rob Sweet stares at his prisoner of war memorabilia in his home office January 28, 2019, in Valdosta, Ga. Sweet was shot down and captured on Feb. 15, 1991, for 19 days during Operation Desert Storm. (US Air Force/Senior Airman Taylor Davis)

Air Force Lt. Col. Rob Sweet says he knew what to expect after he was shot down in his A-10 Warthog near Basra, Iraq, in the minutes before he was captured by enemy forces.

It didn’t stop him from thinking, “I’m a dead man,” he said in a news releaserecalling the mission.

It was Feb. 15, 1991, during his 30th mission as part of Operation Desert Storm. The 24-year-old first lieutenant and his flight lead and wingman, Capt. Stephen Phillis, went out in their A-10s to strike noteworthy targets and Iraqi Republican Guard tanks near an oil field, dodging surface-to-air missiles and gunfire. They were assigned to the 353rd Tactical Fighter Squadron, operating out of King Fahd International Airport in Saudi Arabia.

Sweet, the service’s last serving prisoner of war, retired this week as the deputy commander of the 476th Fighter Group at Moody Air Force Base, Georgia, the Air Force said Tuesday. He reflected on his 19 days as a POW and how the experience shaped his life as a pilot and leader.

With heavy fire all around, Sweet — call sign “Sweetness” — and Phillis were told to leave the area. But the two held on to check out one last crucial site.

“We left and found a pristine array of tanks that had not been hit, which shocked us because by that point everything had been bombed for the past 30 days,” Sweet said in the release.

Then, he felt a hit to the back of his aircraft and part of his right wing, prompting him to eject over enemy territory.

Phillis radioed to search-and-rescue forces after his teammate bailed out and flew around the area to draw gunfire away from Sweet as he floated downward. His aircraft was hit by an Iraqi SA-13, causing Phillis to crash. He was killed in action, according to Air Force Magazine.

More than a dozen Iraqi soldiers arrived to detain Sweet. Once jailed, he was beaten, starved, “fought off diseases, and dealt with emotional and mental torment,” the release states.

Sweet was unaware of what happened to Phillis until a prisoner exchange brought him out of confinement.

“I was not without psychological problems,” Sweet said. “I had survivor’s guilt, and it took me a long time to get over that.”

Sweet said he knew Phillis had aimed for a 20-plus service career in the Air Force, so he aspired to do the same. An Air Force Academy graduate, Sweet put in 20 years on active duty before transitioning to the Reserve, according to a separate release. Together, his career spanned 33 years.

He said his most fulfilling assignment was becoming a squadron commander to mold the next generation of pilots.

“You have to find it [motivation] for yourself,” Sweet said. “Find a leader you want to emulate and do that. There’s fundamentals people need to have in order to be a good leader, of course. One thing is to lead by example and from the front. Secondly, a leader should take all the blame and none of the credit.” 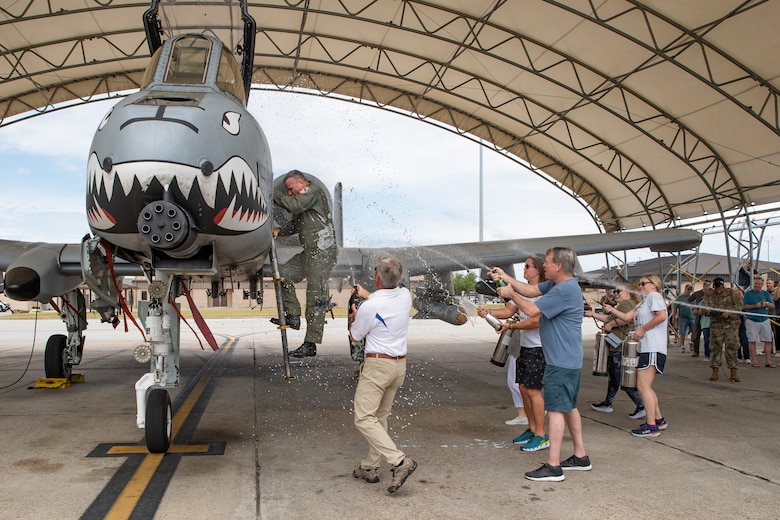 Sweet took his final A-10 flight last weekend, what’s commonly known as “the fini flight.” His friends and family attended the ceremony, where they doused Sweet in water and champagne as he climbed down from the aircraft.

“You’ve had an outstanding career that I know you, your family, friends and fellow Airmen are proud of,” Air Force Chief of Staff Gen. Charles “CQ” Brown said in the release to honor Sweet.

“With your retirement, it will be the first time in the history of our Air Force that we will not have a former POW serving. Thank you for all you’ve done.”

Phillis was posthumously awarded the Silver Star for his actions in combat that day. Brig. Gen. Jim Demarest, head of the Florida Air National Guard and a Desert Storm veteran, is lobbying to get Phillis’ award upgraded to the Medal of Honor, Air Force Magazine said.